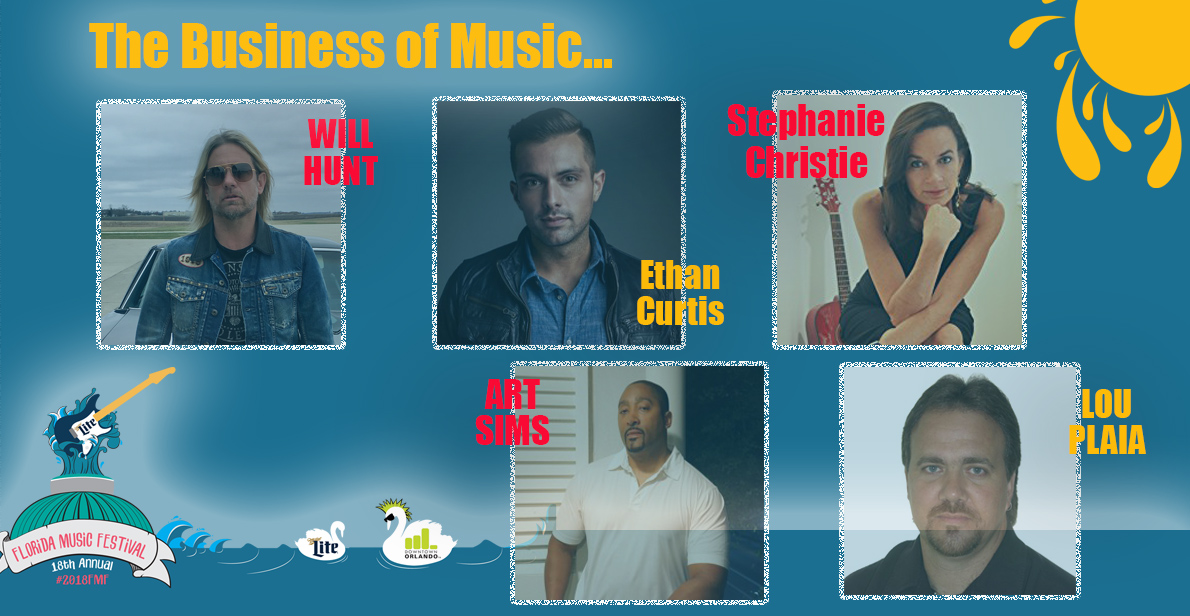 The Business of Music…

The Florida Music Festival & Conference boasts a history of presenting the who’s who of all facets and genres of the music industry. The 18th Annual Conference welcomes some of the top names in the electronic dance community on Friday, May 11th at the historic, Ace Cafe, in the 2nd floor Stonebridge Conference Center. All registered industry, media and artists are welcome, as well as all UCF & VCC students are granted free admission to network and learn from the finest minds in the music business, throughout the FMF 2018 weekend.

Will Hunt is an American drummer and songwriter known for brandishing a hard hitting style and showmanship in multiple rock genres.
Will has played with and was a founding member of Skrape (RCA) and Dark New Day (WB), but his big break came when he was chosen to be Tommy Lee’s drummer in Methods of Mayhem. That was the role that started a career trajectory that hasn’t stopped since 2002. Since that time, he has played with Motley Crue, Stained, Static X, Black Label Society, Vasco Rossi, Slaughter, Vince Neal, and of course is an active member of Evanescence. Will is also known around the world as a clinician and a sought after studio drummer.
Currently Will has a few of his own bands in the works including White Noise Owl, and Thirst. Both bands are on the move so be on the lookout!

Stephanie Christie is an Artist Manager and Publicist based out of Orlando, FL. With clients across multiple genres, her company Stephanie Christie Management & Publicity concentrates their efforts on developing each artist’s individual brand. Her independent artists and their music have been featured in films, television shows, commercials, radio programs, blogs, reality shows and more. Her goal is to give her talented clients an image, a plan and ultimately a brand that not only embraces their sound, but speaks to their authenticity. Her celebrity clients can be seen on ABC/Lifetime, NBC, AMC, Showtime and on the big screen as well. She has been a guest speaker/panelist at numerous music festivals and conferences including Driven Music Conference, Florida Music Festival and Cutting Edge Music Conference, Sonorous Music Festival and Full Sail University. Her passion extends beyond the music and celebrity-branding field. She serves in various capacities on community organizations including Boys and Girls Clubs of Central Florida, Easter Seals, Make-A-Wish Foundation, Arnold Palmer Foundation and the Leukemia and Lymphoma Society.

entertainment focused, brand-building executive, Ethan Curtis is
President and Co-Owner of Plush Recording Studios, where he works with artists, record labels, and various other entertainment professionals to facilitate the making of hit songs. As a primary organizer of The Network Music Conference, honored speaker and panelist at Full Sail University and Florida Music Festival, Advisory Board Member at F.I.R.S.T. Institute and Orlando Bands, and full-time student at Rollins College, Ethan is easily one of the Orlando entertainment industry’s hardest working rising stars. Under Ethan’s leadership, Plush Studios continues to establish a track record of attracting a growing number of industry A-listers to the city every year, reinforcing awareness throughout the industry of Orlando as a legitimate player in the world music scene. Avicii, Flo Rida, David Guetta, Nicki Minaj, Christina Perri, J LO, Chris Brown, Afrojack, Prince Royce, Stevie Wonder, Jess Glynne, Paramore, Florida Georgia Line, French Montana, Yandel, and Jason Derulo are just a few of the superstars who have crafted hits with Plush.

Reverbnation.com (founder/EVP Industry Relations)
Music industry veteran Lou Plaia co-founded ReverbNation in 2006. Since that time, ReverbNation has helped millions of emerging artists build their careers with its powerful career management and online marketing tools. These tools, combined with its A&R and Artist Development capabilities and broad industry relationships offer emerging Artists from around the world access to the global music industry. The company operates worldwide with customers on every continent and more than 10 million unique visitors come to ReverbNation.com every month.